As discussed in this Tuesday’s New Media New Marketing report on TheTVNews.tv (video immediately below), I took advantage of a press pass last week to spend a day at the very alive and vibrant ad:tech SF online advertising conference. It was very stimulating as well as a bit overwhelming, as most good conferences are. (Note: Examples and references are linked below.)

One educational note was revealed as I first entered the press room. Their sign read, “Press, Bloggers & Twerps.” I commented that I had not seen twerps get press credentials previously. At this point, I was told apologetically that the sign was an error. It should have said, “Tweeps.” We are all learning. And, apparently there were only three tweeps deemed influential enough to get a press pass, but this was a “first” none the less.

A highlight for me was the keynote by French entrepreneur, Loic Le Meur, founder of Seesmic.com, who now lives in San Francisco. Loic accurately positioned social media as the third major wave of internet marketing. The first major wave, as he described it, was just having a website. The second wave was being savvy enough to be found on Google (search engine optimization or SEO). And, the third is now the ability to “earn” interactions via social media. He emphasized that social media is not about “campaigns.” It’s for listening and engaging.

Along these lines, I also appreciated comments by Larry Weintraub of word-of-mouth marketing agency, Fanscape, who explained that engaging in social media marketing has many more benefits than old world marketing. All with enormous value. Without embellishment, the four solid reasons to go social are:

In my opinion, none of these benefits should be under-rated.

You can watch Loic’s keynote via this link. The Hitler video which Loic included (amongst the dozens of other Hitler parodies based on the Constantin Films movie that I mention in the video above) can be viewed here, if it’s still up. It’s very funny if you are geeky enough to imagine Hitler expressing Steve Jobs displeasure over the loss of that famous iPhone G4 prototype.

Here are other examples of advertisers’ money moving to online video, as well as other links mentioned in my video report above:

BONUS #1: TWITTER ADVERTISING
Amongst the MANY smaller businesses exhibiting at ad:tech SF, I was interested to learn that Twitter is now not only being used for social media engagement; but beyond Twitter’s own advertising expansion (the potential of which Andrew Goodman calls “huge”), there is also now a Twitter-specific “contextual, targeted” independently-run Twitter advertising platform called 140 Proof.

BONUS #2: BRANDS AS PUBLISHERS a.k.a. Content Marketing
Here’s a link to a great set of links that further illuminate the “brand-led online video” trend which is also called “Brands as Publishers” by this page’s author, thought-leader, publisher, John Battelle, and “Content Marketing” by others. Checkout It’s All About Publishing, a.k.a. it’s all about content. 😉

And, as I’m sure you know, there’s “more to come.” Including an inside track on branded YouTube channels that I’ll be covering in a new blog post and video report soon. I met with Google/YouTube at ad:tech and an announcement regarding this development is expected in, roughly, mid-May.

(Request: If you watch the video above on YouTube or Facebook, please comment etc. And while you’re here, I would appreciate any comments and/or feedback that you may have. I’d love to hear from you.)

This Tuesday’s edition of TheTVNews.tv which is shown immediately below, features the links, tools and resources that can be found below the video. Enjoy! 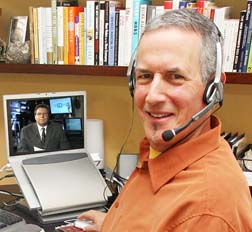 We’re pleased to get some “ink” from the local Tiburon, CA community newspaper, The ARK. The article has garnered some nice positive feedback from my local community as everybody seems to be excited to learn more about technology and today’s rapidly expanding multi-screen media environment.

Please click the following link to view the article now as a PDF (embedded via Scribd.com, a very useful tool) in our News & Media page.

It’s fun to be in the “news.” Thanks for reading.

P.S. I’m still looking for more opportunities to offer my “What Every Business Should Know About Internet Marketing” workshop/keynote. Please click here for more info and let me know if you have any ideas or if your organization or business networking group would be interested.

My video comments on this Tuesday’s New Media New Marketing report (see video below) on TheTVNews.tv seem to resonate with others, including this online video program’s host as well as a video producer that I met today at the Apple store. Bottom line: Apple’s elegant new device is ideal for media consumption. As to media creation? Not so much.

Here’s the video report with one exception to this linked below. Do you agree?

One exception is the excellent tech cartoonist, Robb Cottingham, who explains how he created today’s cartoon with an iPad and a special drawing tool. Good notes too on iPhone art apps. Read Cartooning on the iPad? Yep.