For those of us who more or less “live” online, it’s kind of amazing how many businesses and entrepreneurs are still struggling to understand and benefit from the amazing power of Internet marketing. If this is you, now there is a great way for you get up to speed, for free!

Jon has given his one-hour workshop, “What Every Business Should Know About Internet Marketing” in locations from Kona, Hawaii to Silicon Valley (as you can see in the video clip on Jon’s keynote speaker web page). Now, as just one of the benefits of registering for the free level of New Marketing University, NewMarU.com, this information-packed hour is being offered FREE via the Internet and phone conference lines on Tuesday, January 18th at 10:00AM PT / 1:00PM ET. Click here to register now >>

This useful and informative webinar includes a complete overview of the three main areas of Internet marketing, including:

Why are we producing this event for free?

>> Please Click Here to Register Now <<
It takes just 30 seconds, really! And, even if you can’t make it live, by registering you will make sure that you get the link to the free recorded version.

Or view our 1-page PDF with the generic course description below . . .
What Every Business-Onesheet 03.25.10

For those of us who work (either for ourselves or for clients) is pursuit of organic or natural search engine rankings for targeted keyword phrases, there is a slew of information out there about both the on-page and off-page factors that contribute to these rankings (as I explain in my internet marketing ebook: “EBiz Express: What Every Business Should Know About Internet Marketing“).

I’m writing not only to make this shameless plug, but also to share a new resource that I just found that aggregates the opinions of an impressive selection of experts in order to indicate which of the various factors carry the most weight (according to these experts). As something of an expert myself, I found this interactive page to be informative and useful. Thus, I recommend to you:

We are way too early in this to be talking about blossoming, but the sprouts or seeds that are the revolution of the advertising business going totally digital, totally accountable, totally targeted and totally interactive are HUGE!

I cover the basics in my internet marketing ebook, and today’s New York Times covered how Microsoft is trying to catch up with Google in this arena. This is a good article packed with perspective.

At one point, this NYT article emphasizes how advertising-supported free media is winning out over subscription models by pointing out that, “In recent days, two prominent news Web sites — The New York Times and The Financial Times — said they were scaling back attempts to charge subscription fees for some of their content.”

And then Microsoft CEO Steve Balmer says, “As much as people sometimes like to pick bones with advertising, people much prefer an ad-funded experience to one that they pay for.”

Hey, isn’t this the guy who runs a software company that sells more software (and software upgrades) than any other company on earth?

He continues: “Even the basic software that we’ve delivered for so many years — if it can be ad-funded in the way it gets delivered to consumers, it probably will be ad-funded.”

In other words, free ad-supported digital media will rule, and digital advertising will blossom into channels of humongous proportions… proportions that make Google as it exists today seem small.

Bottom line, they all agree that it’s ALL going digital and this will change everything. Personally, I’m interested in building an advertising “on-ramp” for small businesses… A web application platform that would guide small business users so that they could leverage the advantages of the new media & advertising world. This is seriously needed by millions of small companies.

Like I’ve been saying for years, we need communication bridges spanning the grand canyon gap between people and technology… Anyone want to play?

I was pleased to cover the scintillating O’Reilly Tools of Change for Publishing conference that was held last week in San Jose for eContent magazine. It was a worthy conference filled with leading edge thinking (at least mostly.)

There are many ways to look at the launch of Google’s new Apps platform, but for me, it looks like a pretty cool and very low cost ($50/year/user) way for a small business to do a web site without traditional hosting, and with a bunch of neat features.

Because it supports direct domain (as well as sub-domain) hosting and includes integrated e-mail as well as a bunch of features (from Google Page Creator for creating web pages to calendars and other forms of collaboration), it’s quite powerful. More info here specifically for small businesses.

I think the biggest challenge will be having small businesses understand the scope of what’s being offered.

On the other hand, the bigger business story for larger enterprises and the broader IT market is that Google is Challenging Microsoft (NYTimes) with a service that offers email and more for $50/user vs $225/user annually using Office and Exchange.

that gives small business owners a convenient way to access (or add) local search listings on most of the important local search directories (only Google seems to be missing) including Yahoo Local, City Search, YellowPages.com, Verizon Superpages, Yelp.com, Insiderpages.com and more.

The result is the ability to manage your business’ “web identity” and online “reputation.” So, if you have a business that has local, face-to-face community contact (in other words if your business does not exist entirely on the web), then MerchantCircle is definitely worth checking out. You can monitor and update most of your localized listings and also network with other local businesses in a very state-of-the-Web 2.0-art environment.

Last Friday I was interviewed for an hour by the delightful hosts of the eMarketing Talk Show. The four-part interview, “Leveraging your Website to Grow your Business: Best Internet Marketing Practices for Small Businesses” is posted here: http://www.emarketingtalkshow.com/advertising-agencies/online-strategies.asp

I look forward to your feedback. I hope it’s useful to many of you as a solid introduction to the three main types of internet marketing and more. Enjoy!

> Weebly.com has an impressive video demo that makes it look (to me, at least) like Weebly may well be about the easiest way available for almost anyone to create a website. The video demo shows a drag and drop, practically brain-dead simple interface… and that’s a good thing!

> Likewise, BlogTalkRadio.com has it’s own push-button interface that takes the audio studio work, or even the GarageBand software production out of producing a podcast talkshow via the phone, complete with RSS feed. And some people say Web 2.0 is just a concept…

In both cases, no fuss, no muss, no independent hosting account is required.

FYI, I’ve also posted my first WordPress website, which was also a reasonably straight forward process. It’s a bit more feature-rich and blog-oriented as compared to Weebly, but I’m pleased with the results (which are viewable at: TheJoyofGolfing.com). Not bad for a rare solo effort (professionally, I’m more of a team player).

Any comments or anyone want to share their experience with any of the above services?

I’ve been using free conference calls from FreeConference.com for some time. It works. No toll free number, but no per minute charges either. Now thanks to a tip from NYTimes’ David Pogue I’ve found LiveOfficeFreeConference where you don’t have to make a reservation, AND you can record up to 60 minutes of the call (just press “5*”). And, they make this recording easy to share because they send you a link to an MP3 file (within 60 minutes). This way someone who couldn’t be on the call can hear it. Now that’s a convenient service! And the price is right. 😉 Enjoy. 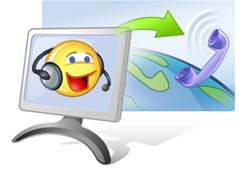 Yahoo has joined the Internet telephony game by bundling a Skype, Gizmo Project (my fav) Voice over IP (VoIP) service with Yahoo Messenger.

Among Google’s many new initiatives is Google Finance; but that wasn’t even one of the 25 things Danny Sullivan loves about Google.

There are new Web 2.0 applications every day… Today, I was especially impressed by one of the niftiest home page sites I’ve ever seen (you don’t even have to sign in to personalize your page): NetVibes. Really impressive. (btw, it seems to me that TechCrunch is the best place to tune into the latest Web 2.0 developments… pun intended.)

I know it’s not just a “good news day.” Things are accelerating again. Look out more is on the way!

(Oh yeah, and the hackers have already got Windows booting on an Intel MacBook Pro.)