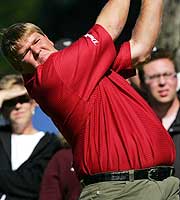 How could he miss that putt? A mental error? Perhaps. A heart-breaking ending? For sure. Does it change the way that we love John Daly? Not really. After all, he did out drive the un-out-drivable, Tiger Woods on that first playoff hole. A heroic golfing feat in itself. I guess it’s time for another comeback, eh, John? You proved that you’ve got the right golf stuff. You also showed more than ever that you really are like me. It’s something that I might have done. But I’ll use the experience not to do it… Please God!

Worldwide golfer public sympathy was reflected in this report from Reuters including the headline, “Win or Lose, Wild Thing will always have the fans” and the perfect lead, “No other player in the game could have triggered wider public sympathy in the agony of defeat than people’s champion, John Daly.”

Or, you may also want to check out Tim Kawakami’s hearfelt rendition of the WGC-American Express Championships tragic ending in San Jose’s Mercury News.

Golf Lessons in Losing
The Grand Mr. Gore is Great for Golf
Michelle Wie Getting Set to Turn Pro
When Will Wie Win?