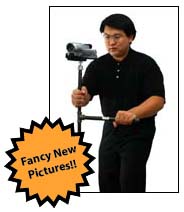 First, I discovered the YouTube video posted below about building a low-cost electronic whiteboard using the same Nintendo Wii hardware and custom software that he is giving away. Way cool!

Now, I’ve learned that Johnny has named his blog after a term I’ve never heard before and which I presume he invented, “procrastineering” which he says means “giving into productive distractions.” I can totally relate. I presume he means like me blogging right now instead of working, right? Johnny’s blog is http://procrastineering.blogspot.com/

And then (yes, there’s more), I found out that way back in 2000, he invented a $14 steadicam for videographers replacing that expensive piece of equipment that every semi-serious video camera person needs these days, but many cannot afford. He’ll even put one together for you and sell it for about $54 including shipping!

This guy’s so cool that he’s even put out a call for Mac developers to help him develop a Mac version of the Wiimote Whiteboard.

Johnny, I’m officially your fan. We even have the same “JL” initials. 😉 Great stuff.