In the article, For a Start-Up, Visions of Profit in Podcasting NYTimes’ John Markoff stays sober in describing a mini-start up that’s making a move on the emerging market for podcasts. The most quotable quote, IMHO, attempts to provide perspective on how the leading commercial audio download service, Audible.com and podcasting may overlap (in the future, of course) with radio listeners:

“When I started Audible and we started signing up radio partners, people would ask me, ‘where does your technology leave radio?,’ ” said Donald Katz, Audible’s chairman. “Now it’s clear that the creative capacity that is out there greatly outstrips the capacity of the radio pipeline.”

And, here’s the good news, from my perspective, as described by Markoff:

“While still too much in its infancy to be considered an immediate threat to the radio industry, podcasting does present the prospect of a growing army of iPod-toting commuters who take programming decisions out of the hands of broadcasters and customize their own listening.” 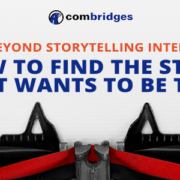 The Beyond Storytelling Interview: How to Find the Story that WANTS to Be Told

Improve Your Video Connections with These 4 Recommended Video Software Tools