Noted American writer David Foster Wallace concludes that “It is unimaginably hard… to stay conscious and alive in the adult world day in and day out.” We all know these challenges. At least those of us who are trying to live our lives fully awake, or as awake as we are able to be… Wallace rants, “simple awareness; awareness of what is so real and essential, so hidden in plain sight all around us, all the time, that we have to keep reminding ourselves over and over.” Ain’t it the truth? But equally fascinating, for me at least, is the articulate, insightful, off-handedly humorous, yet fully forthright and un-cynical way that DFW brings a real message home for the Kenyon graduating class. He is a remarkable writer. Thanks, my son, for another solid referral. Read the full text of David Foster Wallace’s commencment speech at Kenyon University 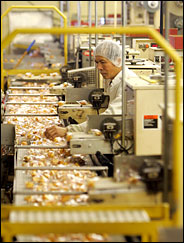 Maybe following the advice, or at least the numbers, in fortune cookies isn’t such a bad idea after all. The New York Times reveals all.

If you want to learn to play better poker, I’ve got a tip or two for that too. Click here. I don’t write much about games, but it looks like the soon to be released Sony Playstation Portable is worth noticing beyond it’s gaming capabilities. Among other things, it looks to be a pretty awesome video player too. This is, in part, enabled by a new storage medium called UMD or Universal Media Discs. These baby’s hold 1.8 gigabytes!

And, it won’t be long before we’ll have portable devices holding much more. For example, IBM’s got a postage stamp-sized hard drive due out within two years that is said to hold about 500 times that much. Soon, your cell phone will have way more memory than any of today’s iPods.

If you’re interested in online poker, you will likely enjoy this article from Sync magazine. I did, and I am. Watch for more in Media Mall’s online poker section soon (I hope). Click to read: America’s Greatest Online Poker Player