The first edition of our “It’s a Wonderful Web” e-newsletter for 2013 is out. It includes the following articles:

If you’re not already a subscriber, click here to read it online.

The new edition of our “It’s a Wonderful Web” enewsletter is out. It includes the follow short stories:

If you’re not already a subscriber, you can read it online by clicking this link.

Pinterest is much more than the latest and greatest “hot” new social network. Because of it’s visual nature, I believe that this upstart social network reflects the next generation of socially networked communication. In the current and coming stages of the evolution of the Web’s social revolution, the written word is no longer sufficient.

In case you haven’t tried it yet, Pinterest is essentially an online vision board. It lets people “pin” images that they find inspiring, useful or beautiful and then share their collections of images—called “Boards”—with others. When people “re-pin” the images, they are essentially “retweeting” or sharing visual communications in a state-of-the-art social media style. 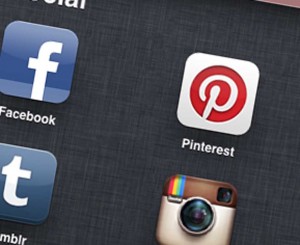 This naturally compliments the ways that video and photo sharing have become majorly important. In fact, the array of visual communication innovation that we are seeing right now is indicative of the dawn of a new age. The web has quickly become a more dynamic visual medium. Text and hyperlinks were a foundation, but only a beginning. And we are still in the early stages.

This trend isn’t new, but it does make a big difference. For example, Facebook power users know that when you share pictures, not just text updates, it fuels increased engagement in a big way. In other words, you get more “Likes” and comments when there’s a visual component to what you post.

Elsewhere, Tumblr has extended the Twitter-powered popularity of micro-blogging in a much more visual direction, and the popularity of using Instagram to share and talk about photographs is also surging (and is poised for major new expansion when the Android version of the Instagram app is released soon). ReadWriteWeb even reminds us that it is this mobile-phone-powered digital photography trend that slew the former photo corporate dragon: “Death by Smartphone: How Mobile Photography Helped Kill Kodak.”

And then there’s YouTube which recently announced that 24 hours of video is uploaded to their site every twenty-four seconds. The video visual media explosion is so dramatic that YouTube itself produced this quick little 45-second video in an attempt to make its mind-boggling growth comprehendible:

If doesn’t clarify this explosion for you, Time Magazine recently ran an article, The Beast with a Billion Eyes, which characterizes YouTube as “the most rapidly growing force in human history.”

“This is the year that photos challenge writing as the lingua franca of the social web… If you’re not taking and posting pictures to dedicated photo networks and cross-posting (when appropriate) to Twitter and Facebook, you’re missing out on a huge opportunity to grow your network and see the world through the eyes (or cell phone cameras) of thousands of new friends.”

The fact that the verb “pinning” has been showing up in conversations that aren’t even specific to Pinterest is a huge testament to the fact that people are captivated. If you think about how many times a day the verb to “google” is used to mean “search,” you can see that we’re on to something.

Why Is This Important for Business?

According to the Wall Street Journal, traffic to the Pinterest website has grown tenfold over the past six months. In January, the number of visitors on Pinterest was already almost a third of that on Twitter.

But Pinterest’s impact of web traffic may be even greater than Twitter’s. Based on a recent study conducted by Sharaholic, Pinterest drove more referral traffic to sites in January than Google+ (with 100 million users!), Reddit, YouTube, LinkedIn and MySpace all combined. Those are big-time numbers for the new kid on the block.

But, is there really room for another player in the social media VIP room? New York Times technology columnist David Pogue in his review, A Scrapbook on the Web Catches Fire, gives three good reasons why there definitely is:

The blogger Beth Hayden sums it up well when she says Pinterest can  “…start making your social media strategy more beautiful, one little pin at a time.” When you add to this the fact that the early research seems to show that it will also make your social media marketing more engaging; and, when done appropriately, it will also help connect you to your constituencies at a deeper level: What’s not to like?

Luscious Links to Unlock Pinterest: Free Resources Show How to Pin Your Marketing

You have to love a story about a 24-year old who made a monumental difference by helping Barak Obama to become president-elect of the United States. In other words, this young dude helped change the world.

His name is Chris Hughes and he was one of the three co-founders of Facebook, the runaway social networking phenom to which I am addicted. And I am 61.

Mr. Hughes left Facebook last February (taking stock options that are worth at least tens of millions with him) to become the “online organizing guru” for the Obama campaign, moving from Silicon Valley to Chicago. Obviously, in hindsight, the move was worth it. MyBarakObama.com was brilliant and brilliantly successful. Thanks so much, Chris.

The New York Times published his story in July calling him “The Facebooker Who Friended Obama”
and he came to my attention because
Beet.TV republished a two year old video interview with Hughes last week.

I have a new enthusiasm for the ways that the world is changing, and I’m inspired by young people like Chris who are making real changes happen.

Continuing on the Gen-X theme, I was also very moved by Heather Havrilesky’s “open apology to boomers everywhere” on Salon.com. It was nice of her to speak so respectfully to her elders when she said, “Your earnest, self-important prattle has gotten on Gen X nerves for decades. But now we finally get it.” 😉

For your browsing pleasure…

In announcing the new NetVibes roll-out of the ability to create public personalized pages, the marvelous Michael Arrington also offered his own personalized, customized TechCrunch NetVibes page “featuring many of my favorite news feeds and a few widgets.”

I offer this to you because it is a cool convergence. From my limited experience, NetVibes is my favorite customizable “home page;” but more importantly TechCrunch is my favorite source of information about the bleeding edge of Web 2.0. Scroll down on this TechCruch/NetVibes page to see, for example, the Alexa Widget showing TechCrunch ahead of Business Week and CNet in online viewership; or enjoy the build-in video references; and on and on.

If you’re reading this, you’ll probably find things of interest on the Netvibes.com/TechCrunch page. If nothing else, it’s a great demo of the plug-and-play nature of the ever-expanding Web 2.0 socially-networked Internet.

I made a post re the build-your-own-social-network platform Ning below, so this is just a small follow up because I couldn’t resist passing along TechCrunch‘s quote of the NYTimes quoting Ning’s founder, Marc Andreesen regarding Cisco’s buyout of social network-building company Tribe.

Andreesen said, “The idea that Cisco is going to be a force in social networking is about as plausible as Ning being a force in optical switches.”

Be careful out there… 😉

Rupert Mudoch’s Fox big media conglomerate’s ownership of mega web upstart MySpace.com is not only controversial, but also apparently largely driven as a platform for video content. Illumination of this phenom appears in the AlwaysOn interview with Fox Interactive president Ross Levinsohn and in the BusinessWeek Online article, “Fox Feeds the Online TV Frenzy.”

IMHO, TV doesn’t get much better than John Stewart’s Daily Show on Comedy Central. I am frequently grateful for it as an antidote to the daily news. Now, Stewart’s “trendspotting” feature takes on “social networking” such as MySpace. It cracked me up. Nice that Google Video (and someone who uses it) has made it available online. Watch this Daily Show segment now.