CES,  the Consumer Electronics Show, happening this week in Vegas, is a sure bet for the inside track on the latest innovations in social TV and the convergence of traditional television and the exploding world of online video. As I explain in TheTVNews video commentary below, three CES news stories stand out for me as big-picture trend indicators. This blog post also provides links to the stories themselves so you can get more details.

Bottom line, the difference between being online and watching TV is blurring as a hybrid experience of the multi-screen experience and social TV comes to the forefront. Contextualized advertising, watching TV with friends who aren’t actually in the room and integrated TV/web browsing are just a few of the changes I expect to shake up the way we think about watching television as well as the TV industry itself.

1. Google TV Isn’t Going Away
Despite its slow start, Google TV is re-emerging as its Android platform is being integrated into more and more Internet-enabled TV sets. Thus, Google is re-entering the TV market via at least four TV manufacturers: Sony, Samsung, LG and Visio. All four will be including Google TV into their internet-enabled televisions.

2. Social TV is Already Attracting Significant Investments
The social media and mobile Internet revolutions (and I don’t use the term “revolution” lightly) have led to the rapid growth of people using mobile devices to interact while watching TV. This has resulted in an assortment of “second-screen,” social TV solutions, which allows users to hang out on the “virtual couch” with their friends while watching TV.  The fact that one of these apps, Zeebox, has just received at eight-figure investment from the News Corp-controlled pay-TV firm BSkyB shows how serious this new media playground is becoming. Neat Zeebox promo video and more details here. (Meanwhile, Forbes magazine thinks GetGlue has taken the social TV lead.)

We can only hope that our ever-splintering attention level will serve as motivation for content-creators to offer deeper meaning, connection and context, within whatever social platform we happen to be sharing, at any particular moment.

If you’d rather watch than read, my video report starts at about 20 seconds into this clip:

This Tuesday’s edition of TheTVNews.tv which is shown immediately below, features the links, tools and resources that can be found below the video. Enjoy!

Another week, another Tuesday segment on TheTVNews.tv. This week, I aggregated three new online video news stories that I think merit your attention. My video segment is below, and below that are the Google TV Ads video demo, more comments, and links to all the sources. Please let me know what you think.

Seth Stevenson of SlateV.com did a wonderful job of demoing Google TV Ads for the rest of us. I’m sure you will agree that he proves his point that, yes, anyone with the technical chops to produce a 30-second TV spot and set up a Google AdWords account, also now has the opportunity to be a media buyer and place those TV spots on carefully targeted cable TV networks in the time slots of your choice.

I’m impressed and ready for a client who wants me to do this for them. I’m highly qualified. Are you reading?

By the way, for those of you doing the math, not familiar with Google AdWords campaigns, and figuring that, hey, that’s about $1.30 per website visitor… please keep in mind that it’s not uncommon for AdWords customers to pay $4, $5 and up PER click. And the visitors he “acquired” via this campaign were coming to a strange website URL with no identified service or product being offered.

In what is said to be “a news media industry first,” Cisco has partnered with MSNBC to provide  The Rachel Maddow Show’s New York and Washington D.C. studios with its branded TelePresence technology. According to Cisco, “TelePresence offers what traditional broadcast interviewing technology often lacks: a truly two-way, visual connection between the studio host and remote guest with virtually no audio lag time.”

To me, that’s an interesting tech story, not only because of the “no audio time lag,” but also because of further in-roads being made by a traditionally IT industry player providing hardware services to the broadcast TV industry.

For more details and illuminations of the interactive benefits of TelePresence, Beet.tv has a video interview with Charles Stucki, VP & GM of the Cisco’s TelePresence unit.

Anyone in the marketing or advertising business knows that all marketing agencies are being forced to cross “boundaries” that traditionally defined specific niches. Now, Forrester’s latest report, “The Future Of Agency Relationships: Marketers Need To Lead Agency Change In The Adaptive Marketing Era” sets the stage for overlapping, multi-discipline agencies and the ways we all will be doing battle (or not) in the future.

But if you don’t feel like plopping down $499 for the report, I highly recommend Andy Beal’s Marketing Pilgrim coverage of the report, Forrester Predicts the Interactive Agency of Record Will Die. Beal reveals the main types of agencies discussed and some of the top level data including this quote which gives you a flavor of the sophistication being required in today’s marketing agency market:

It is not enough for adaptive agencies to understand market research, ethnographic, or behavioral data. To fully understand customers, and to leverage that knowledge to improve customer experience, requires agencies to understand the interplay between the various types of data, and crucially, demands the ability to turn the data into actionable intelligence.

Stay tuned. The landscape continues to morph at a record-setting pace. Keep on dancing… and keep your seat belt fastened. 😉 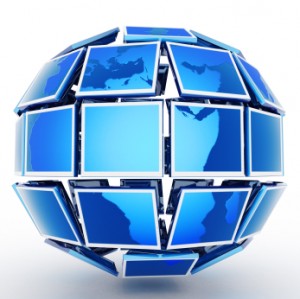 To help put some perspective on at least some of these changes, here are five key online video “Mega-Trends” that I think are worth noting—each illustrated by a current news story from the past week with at least one relevant link for your browsing pleasure.

1. Online Video Just Keeps on Growing.
The latest example: CBS and NCAA set a record for broadband viewing: 3.4 million viewers watched the opening round on computers. That was just on just the first day of March Madness, the national collegiate basketball tournament. CBS and the NCAA put video of all of these big games, held around the country, online at a website they call March Madness on Demand (mmod.ncaa.com). Read more at the Washington Examiner >>

2. Social Networking Usage Surges Globally
The Nielsen Company is reporting that the audience for social networks is growing at a whopping 29% year-over-year. Driven largely by Facebook, the GLOBAL average user’s time spent social networking more than doubled from just more than 2 hours/month in Feb 2009 to nearly 5.5 hours/month in Feb 2010. Interesting, Italy tops the specific country list at nearly 6.5 hours/user/month and the US is just over six hours per user a month. And this doesn’t even include YouTube as a social networking site, which it is (at least in part). I promise you that this trend will continue. The public’s appetite for making connections online and sharing blog posts, digital pictures and videos is just ramping up. Read more details on Mashable >>

3. Online Video Advertising Is Poised for Growth Thanks to Analytics
Beet.Tv posted a very interesting video interview with Mike Bologna, director of emerging communications at GroupM, the giant corporate parent of the WPP advertising and media agencies. Bologna sees formerly cautious advertisers jumping into online video thanks to the availability of browser and viewer use statistics, or analytics as we call user tracking on the web. This valuable info is drawing more advertisers into becoming willing to leverage the power of online video. Here’s the Beet.tv clip so you can hear Bologna’s insights from “the horse’s mouth”:

4. More High Quality & Professional Resources Are Being Committed to Online Video
Here are just two of the many examples of this trend. Again, both announced within the last week:

Of course, these are just a couple of examples of the way that important players are continuously making important steps to increase the attractiveness and viability of their online video offerings. That said, I think both NYTimes.com and TechCrunch are good examples to watch. Both are attracting both a significant volume of viewership as well as meaningful advertising revenues.

5. Major Internet Players, like Google, Are Creating New TV Hardware To Put More Online Video on Your TV
We all know that Google is a software king whose reach goes way beyond being king of the hill in search to include Google Apps (like Google Mail), Google Buzz, they own YouTube, and more. And, then there’s the Google Phone manufactured by HTC. Well now, there’s Google TV.

As the New York Times reports: Google and Partners Seek TV Foothold. Expected to bring a  new kind of Internet video experience to living rooms everywhere, Google TV is a new kind of set top box that is being created in partnership with Sony and Intel. It uses Google’s Android operating system and will compete Internet video boxes like the Boxee Box, Roku, Popbox, and the innovative Sezmi system that I profiled a few Tuesdays ago on TheTVNews.tv.

As you can tell and probably already know, Online TV / Video is not just one thing, but the trends above are clear. This “toothpaste” is not going back into “the tube.” (pun intended)

And, underneath all of this is what you might call “The New Rules of Communication” that the Web has inspired. To be successful, whatever you are doing online, you can’t just be a “broadcaster,” you need to be truly interactive and authentically engage viewers and visitors in such a way that you create real relationships with them. That’s something most TV companies still need to learn… which is good news for the rest of us.