The first edition of our “It’s a Wonderful Web” e-newsletter for 2013 is out. It includes the following articles:

If you’re not already a subscriber, click here to read it online.

The new edition of our “It’s a Wonderful Web” enewsletter is out. It includes the follow short stories:

If you’re not already a subscriber, you can read it online by clicking this link.

Hey, I’ve got a birthday coming up. 🙂 But seriously folks, as much as I enjoy the flexibility of my Flip Ultra, this looks like the professional’s on the run camcorder. I still dream of finding the time to do a kind of video blog and this is the kind of tool (and toy) that could help me make it happen. Click here for the TechCruch review of the Sanyo Xacti with 1080i HD and 300 frames per second slo-mo (I sure could use that to add cool video to my golf blog).

And speaking of video blogs, I actually saw an exercise video clip today that I enjoyed. Get exercised! 🙂

A couple of quick blog bites (vs sound bites) from the NYTimes website which indicate continually brighter days ahead for what I affectionately call The Video Web:

First of all, my fave tech writer David Pogue not only reviewed my Christmas present (see posts and demo video below), The Flip Ultra, but his latest “State of the Art” column, “Camcorder Brings Zen to the Shoot” pretty much nails it. It also informed me–and I had no idea about this–that the Flip is now garnering a rich 17% of all US camcorder sales and “has been the best-selling camcorder on Amazon.com

since the day of its debut. For Pogue’s finely articulated perspective, click here.

The other item is what appears to be a new feature on the NYT website, which is Bloggingheads.tv “diavlogs.” Language-wise this is a double-derivative term. I’ll bet most people don’t even know that the term “blog” is derived from “web log” let alone that a “vlog” is a video blog. Just the same I welcome this combination that creates a new kind of conversation. (kind of rolls off the tongue) I’ve been thinking and occasionally saying that the use of webcams and the ease of the current state of video conferencing should be put to more use. Little did I know that this kind of video dialog, oh OK, diavlog was being so widely distributed. And then imagine my delight when I found at least these two commentators talking about the Barak Obama race speech being more articulate and interesting than most of those duds on cable TV news shows. Right on. It was also nice to see the NYTimes editing down and providing a solid 4-minute excerpt of what appears to be an almost hour-long original conversation on BloggingHeads.TV At least the whole thing is there for you if you want it.

Click here to watch the NYTimes-BloggingHeads edit: “Obama’s Grandmother” which asks the scintillating question: “Is everyone missing the whole point?”

I have to add that the intelligence of this BloggingHeads conversation is in stark contrast to my experience experimenting with the Seesmic.com video “conversation” website which is mentioned in the Davos post below. That turned out to be an interesting attempt from a technological point-of-view, but extremely boring overall. Even Seesmic’s specially produced (and apparently funded) posts were disappointing (to say the least). Sorry. I liked their bushy-eyed enthusiasm, but there’s good web video and a lot that is not so good. Like everything else… 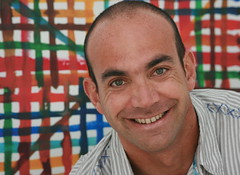 I’m presuming that most of you know about the World Economic Forum held in Davos each year and attracting a virtual planetary A-list who’s who… from heads of state to Bill Gates & Rupert Murdock to celebs etc. etc.

As the video web expands, live person-to-person coverage is becoming quite interesting; and perhaps the best of that batch is Loïc Le Meur, the French self-proclaimed “serial entrepreneur and blogger.” Here’s a taste of “live from Davos” via the video web featuring Emma Thompson, Bill Gates and more…

Btw, Le Meur’s latest start up is Seesmic.com “the dashboard for your videos” and an online video “conversation” platform that’s still in alpha (testing, limited user base, etc.) Click here for a review/demo by BBC News’ Dot.Life

Oh yeah… And then there’s “The Davos Question” on YouTube:

It looks like the video web’s conversations are heating up! 😉

Here’s one of many stories about this on the web today: http://www.earthtimes.org/articles/show/2298.html OR you can test their “beta” video search engine for yourself: http://video.google.com/