I’ve been doing social media since the beginning of social media and I’ve never had a more uplifting experience of community and connection than the one I’ve had getting to know the new video conversation platform called Blab (http://Blab.im). 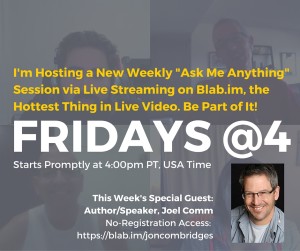 I created this graphic to promote last Friday’s Blab session.

Getting Started with Blab

Last Friday, I did my first regular Blab show (“[email protected]”) and it was surprisingly easy to do and successful. Word spread by social media, and we had people join in late in the show who said that they had heard buzz that we were “killing it” and that they should check it out. Unexpected delight. 😉

We had about 280 viewers who watched live at sometime during the 90 minutes we were on, a pretty steady audience of 60 or so more during the webcast; and, as of this writing, this program has now had over 308 viewers counting the Replay on Blab.im. And, as you will see below, I’ve also posted the recording to YouTube and thus the exposure continues to grow.

Those are just some of the reasons I’m excited.

Part of the reason for this success was that I was honored to have author/speaker Joel Comm (“Twitter 3.0” and other books) as my featured guest. It was Joel who first told me about Blab… Well, actually I got the info from a post of his on Facebook. Joel has become kind of Blab Ambassador. If there’s a Blab “star,” Joel would be on the short list of “nominees.”

Then, to my surprise, as the Blab progressed (may I remind you that this was a live session), I was delighted to have blogging business veteran Darren Rowse join us (see image below). Darren is better known as Pro Blogger and has been a social media marketing thought leader for years. Others who just “happened by” included social media strategist Carlos Gil and digital marketing expert Pam Brossman who both offered some really useful insights and tips (a taste of which are included below). That’s the kind of spontaneous community “happening” it was and which the Blab platform fascilitated.

Another guest that contributed a lot to my first Blab show was Brittnay Metz who is a Blab spokesperson and I guess you could say evangelist. For example, she’s the one who sends out emails to the Blab members, but she also spends a fair about of time on Blab itself participating, answering questions, taking feature requests, and generally monitoring and supporting the user base.

Brittnay told us, for example, that the company was really committed to staying at only 30 employees. She also talked about the fact that Blab’s engineers are going to be developing very sophisticated video analytics.

Both from what Brittnay said and from my own experience, it’s clear that Blab is making sure that their software really works. I’ve experimented with lots of video conversation platforms, and especially considering this is an early “beta,” Blab seems extremely stable. But Blab’s biggest strength is ease of use which, of course, is a very big deal.

All you need is a Twitter account and you’re in with full participation priviledges. Blab is also totally free as they grow their user base and there are no plans for a “premium” version on the horizon. In some ways, I think Blab may be the example of the “Instagram business model.” (Instagram was acquired by Facebook for $1Billion.) I imagine that Blab is going to be acquired by a much larger company at some point, but when I asked Brittnay about this possibility, her response was a quite grounded. She said, “What makes you think we want to sell?” I left it at that. 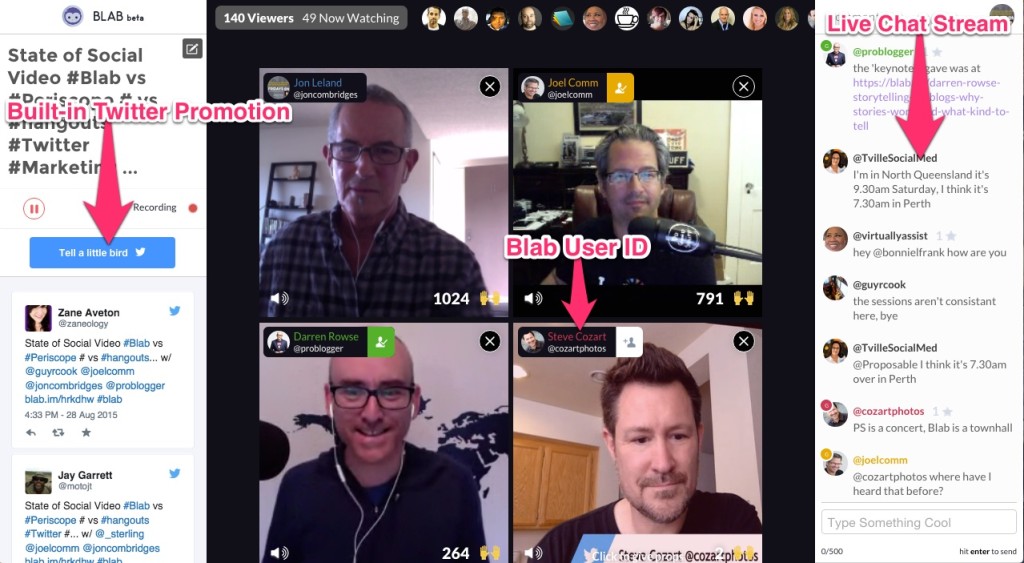 The only significant limitations of Blab’s video implementation that I’ve found so far are that it does not work in the Mac Safari browser (because of the video format that Safari uses) andthere’s a mobile app for iOS, but not yet for Android. The best web browser for Blab is Chrome and the desktop version is more full-featured (as shown above).

Some of the features that I like most are the fact that it’s a conversation environment with four interactive video windows. It’s easy for people to come and go. The host has the ability to accept or reject “visitors” at his or her discretion, and most hosts are quite welcoming. We had people coming and going all through our program.

Blab derives its external social media power through its integration with Twitter. And that’s a big part of what makes Blab powerful as an audience or relationship-building tool. Blab engages users via Twitter with the build-in “Tell a Bird” feature that’s to the left of the video windows (on the desktop version). It’s not only a good way to share what you’re doing, but it actually demonstrates a kind of freedom to interact that is not possible on Facebook because on Twitter “friend requests” are not required in order to interact.

Blab stays highly interactive as well with a very lively chat stream that runs along the right side of the four video windows.

After you host a Blab session, you get both an mp4 video file and an mp3 audio file of the recording. These files are available for you to download and can be posted anywhere (for example, on YouTube, SoundCloud, or wherever). The video recording doesn’t have the screen names nor the chat stream. You can see the difference between this version and the embed code version that’s also provide via embeds that I’ve included below.

Compared to Google Hangouts, in the production sense, Blab is less robust. For example, at this time (although Brittnay told us that this is coming at some future time), Blab lacks screen sharing. Likewise, the spiffy lower-third ID’s that are part of Hangouts are not on Blab, but you do automatically get labeled during the live sessions with your name and Blab ID (for example, mine is @joncombridges).

As a work around for the absence of lower-thirds, people have gotten into using apps like ManyCam and CamTwist Studio (Mac only) in order to put graphics into their video frame. In fact, Joel was doing was doing just that all during our program.

I also think it’s worth noting that, in some ways, Blab’s ID feature is substantially better than the lower-third Hangouts feature because it’s interactive. For example, if you like what someone is saying, you can simply click on that ID to follow them on Blab. There is also a link to their Twitter profile so you can follow or list them there as well. The Blab ID also let’s you address them directly in the live chat stream. You also can click on the lower right of any video image to give the speaker “props.” So, what Blab may lack in snazzy production features, it more than makes up for with ease of use and authentically interactive tools that enable real people to have real conversations, in real time.

What About Lead Capture?

One of the questions that I asked Joel and the others during my first Blab Show was about lead capture, or lack of those kinds of features in Blab. For example, I use Google Hangouts within the WebinarJam “envelope” in order to do lead capture when I do webinars because I want to be able follow up with the people who attend my programs via email. What I’m learning is that Blab is something completely different.

What Blab delivers, possibly “in spades,” is a completely new way to get exposure. And what’s really important is that that increased exposure is delivered via video so people can really get a sense of you and your expertise or value.

I’m finding that I’m making new friends with my fundamental practice of “Leading with Value” and that’s the most dynamic and perhaps the most important part of Blab. Blab really is about relationship building and making authentic connections. People are doing this on Blab in a way I haven’t seen before on any social media network. I really think it’s worth checking out.

A Video-Powered Way to Increase Your Visibility

As someone said during the program, the Blab experience is very much analogous to being at a party and meeting people. So in that sense, for marketers, Blab is  like a new form of the classic free intro call.

One other important dimension of delivering expanded visibility is, as Carlos recommended and I’m demonstrating below, via YouTube. In the future, I’m also going to upload the audio to SoundCloud. In addition, there are people who are using Blab to record podcasts by taking the recording and distributing it via iTunes and so forth. Bottom line, Blab is a new way to get the word out.

That having been said, I watched a Blab the other day that featured Michael Stelzner from Social Media Examiner and he talked about specifically getting enrollments for some of their conferences via Blab. Thus, Blab can be used as an on-ramp both to build your visibility and also, in at least some cases, to make specific offers that then people move down your engagement funnel.

I’m recommending Blab because I’m finding it to be a great way to meet and connect with people. There’s no doubt that in only a little over a week, I’ve made new friends; and, equally important, I’m definitely having fun. Blab is so engaging that it’s literally becoming an addictive kind of social media experience for some people and in that way it’s a great social media environment to be swimming in.

I’m really delighted to have the opportunity to keep this kind of energy going, and I hope to see you (literally via Blab video) next [email protected] (PT).

For the Convenience of Comparison
Please Find Below Two Versions of This Same Program, My First “[email protected]” Blab Program. The first is the embed provided by Blab and the second via upload to YouTube—are provided below for comparison.

Last week, a friend on Facebook (or actually an acquaintance… someone who I’ve never met in person, but within whom I’ve done a little work via phone and email) offered a link (via Facebook) to a live video stream of a techie industry party on a rooftop over-looking Washington, DC. The amazing thing was that when I clicked the link, it actually worked. Instantly, I was face-to-face, in a virtual sense, with party-goers who were saying things like “I just thought you were taking my picture…” to which this guy says, “No, you’re live on the web” and a quasi interview ensued.

If you want a more widely-respected opinion, The New York Times wrote up the whole scene in a Sunday Business section column called “Novelties.” The article, “Capturing the Moment (and More) Via Cellphone Video,” includes some even more compelling examples from the likes of LA’s NPR radio leader, KCRW and mentions two leading live webcam video streaming website platforms (which are enabling these feeds): Kyte.com which calls itself “The Universal Digital Media Platform,” offers ideas for “monetization” and offers the image above as part of its self-promotion, and Qik.com which appears to be a bit more popular with the blogging/social networking crowd, including my pal in DC.

Kyte also offers among other things, “The Kyte Premium Facebook application (which) is more than a simple widget – it’s a branded social communications platform, featuring live video streaming, multimedia chat, viral distribution capabilities and monetization opportunities.” Don’t we all need one of those?