[A Quick Catch Up on Online Video’s Reinvention of Advertising]
As most of my readers know, I’ve been an “evangelist” for the digital video revolution, especially as it applies to the democratization of media, for many years. By now, the explosion and importance of online video via YouTube and other hosting platforms (from Wistia and Vimeo to Brightcove and Ooyala, among others) should be obvious to everyone. What is not so apparent to many people is the opportunity to use online video advertising as a highly-targeted attraction engine.

The game changer over the past few years has been the move to online, streaming video for virtually every kind of communication and entertainment. Advancements in video technology mean huge benefits for society as the power of video is now in everyone’s hands—quite literally due to smart phones, on both the video creation and video consumption side of things. These advancements combined with mobile video’s remarkable reach means even bigger benefits for advertisers.

In fact, the shift from desktop online video advertising to mobile advertising has been nothing short of astonishing. To give you a sense of how big this shift is, consider this: In the fourth quarter of 2013, the number of ads showing on tablets was almost tripled from the previous quarter, according to a FreeWheel TV report in USA Today. Plus, that leap in growth was ten times (10x!) faster than the consumption of video ads on desktops.

Bottom line, this is just the beginning. Mobile is still in its infancy. The original iPad was just introduced four years ago. 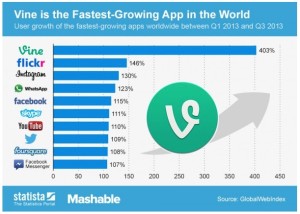 One of the more fascinating aspects of online video advertising is the wide variety of video types that advertisers are starting to use. The traditional broadcast video advertisement, which is served up in 30-second segments and interrupts consumers’ viewing to blatantly peddle a product or service (in a format that is frequently skipped via DVRs), is not what is working in the same ways any longer. In fact, the exact opposite is what is thriving online. YouTube, for example, is full of informative, how-to videos that are less “commercial” and more informative. This approach connects with my marketing philosophy of attracting and engaging, rather than straight sales pitches.

The way video and entertainment is consumed has also driven the adoption of new types of videos that are working in other ways. Skyword reports that a Mobile Marketing Association study showed that video ads of 15 seconds or less and non-skippable were viewed in their entirety 92 percent of the time. If the ads are skippable, only 9 percent were completed. Whether the ad is virtually embedded within an informative clip that “leads with value”( as I like to say), or is delivered in an non-skippable format, these advertising options, again, are just the beginning of a new world that, in my considered opinion, any serious online marketer needs to consider.

In addition, the shorter video formats are getting more popular on stand-alone social video platforms. Between Instagram video and Vine (just to name two), the public is getting more and more accustomed to digesting their video in shorter formats. Few people who are not active on social media realize the reach of these platforms. Some even call Vine “the fastest growing app in the world.”

Another advancement that has made online video an ever increasing opportunity to be considered as part of your advertising budget is the increased broadband data access speeds that consumers are now able to afford. With faster speeds comes better quality video. With mobile comes any where, any time access. Without the distractions of constant buffering, viewers are able to watch longer videos, and companies are willing to invest in better production quality. For example, a large company like LifeLock invested wisely to produce higher quality online exclusive, more informative videos for its target audience to let them know how they can protect themselves and their identity online.

In many instances, little difference in quality exists between what you would see on television and what is being shown on the Web. And, frequently what’s online is more interesting, more personal, and certainly more highly targeted than what’s on TV. And, in terms of variety, the Internet offers so much more. But perhaps even more significant is online video’s interface options.

According to streamingmedia.com, interactivity is the main function that makes online video consumption different from television. However, many advertisers are still missing the boat on this opportunity. Right now, 85 percent of online video advertisements are simply the same content that could have also run on traditional television, where the audience simply sits back and takes it in. By allowing the consumer to get more involved in the ad or the original content, and by being able to place advertising videos (whether ads or informative content marketing clips) in MUCH more relevant contexts, viewers naturally become more involved and connected to the product or service, and thus, more willing to make a purchase.

The Future of Online Video

The Globe and Mail claims that big things are on the horizon for online video advertising in 2014. Smaller companies that had been hesitant to hop on board will see the light and start spending on the medium. And, speaking of spending, I don’t think there is any doubt that this will be the year that more companies start shifting their advertising dollars from traditional television to social media and online video. Another shift will be that online video production will become more of a specialty for agencies. With the differences between traditional and online video becoming more apparent, through the inclusion of interactivity and highly-targeted contexts, for example, more production companies and marketing agencies will specialize in online video production and distribution (yes, as ComBridges has been doing for some time).

Obviously, the ComBridges team is here to help if you are interested; but more importantly, I wonder whether it will be you or your competition that will take the lead by leveraging the amazing power of online video and online video advertising.

I’ve seen again and again that it’s those market leaders who stick their necks out to engage with these leading edge trends that grab a significant competitive advantage, especially over time. “A word to the wise” should be sufficient. Yes?

3 Videos That Inspired My Business & My Life Last Week