I have fond inspirational memories of attending Richard Saul Wurman’s TED (Technology Entertainment Design) conferences in Monterey in the ’90s. Now you can taste some of this inspiration with short videos that have been posted free online. A remarkable opportunity.

I’m grateful to David Pogue of the New York Times for pointing these out in his blog: “These 18-minute talks–the first batch included Al Gore, Tony Robbins, and me (blush)–generated an incredible response, as well they should. To see them in person, you would have had to pay $4500 and flown out to Monterey, CA in February–IF you could get a ticket. (The TED conference sells out a year in advance.)… These are amazing, profound, funny, attitude-changing presentations, and I highly recommend that you take the time to watch ‘em.”

Watch the TEDTalks
(You can even subscribe to them via iTunes and put them, audio or video, on your iPod or other MP3 player.) 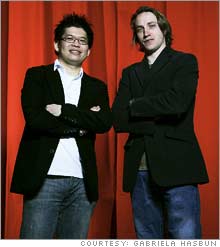 It’s amazing both how fast the video sharing sites are growing and how far the startup leader YouTube.com is, well, in the lead. The site just went live last December and is already kicking the asses of the likes of Google Video and Yahoo Video.

According to a Hitwise research study sited in this PCWorld report, “For the week ending May 20, YouTube nabbed almost 43 percent of all visits to video Web sites, while the video section of MySpace.com came in second with 24.2 percent.” The presumably bigger video search sites all lagged with less than 10 percent.

For more perspective, YouTube’s twenty-something, former PayPal employee founders, Steve Chen and Chad Hurley (shown here) offer a bit of their brief history and their insights in an interview by CNNMoney.com

Om Malik’s blog also has some interesting related stats in YouTube vs Yahoo.

Leave it to TechCrunch to deliver the state-of-the-art overview (with best of breed links) of “Download Your TV — The Current Options”.

And leave it to a blog to have great links in the comments. Like USA Today’s perspective and overview of “ethnic” broadcast audiences.

And, the fact that the Saddam trial is being carried live on the Web. Who knew?

Looks like a good, cost effective ($9.95) resource for those looking for a podcasting manual: Learn more about the 93-page podcasting ebook.

This is what I get for following my own links! A nice thing about the two links below which provide links to cool Web 2.0 web services/sites is that they are a kind of demonstration of where things, hopefully, are going online. A great example is digg, which is on both lists. Digg led me to The Top 10 Podcast Episodes of 2005 which is illuminating, if for no other reason, because it illuminates how cool and diverse (from Stanford University to the Catholic Insider to a Zencast with Buddhist Thich Nhat Hanh, just to name three) the podcast universe has already become. Great list.

I decided to browse some of the video podcasts on iTunes and sure enuf found a tech video program that was actually chock full of useful information and especially web links. commandN‘s holiday episode included a link that complements the one below, “Top 10 Innovative Web 2.0 Applications of 2005.” And I also appreciated the link to LibriVox.org for free audiobook downloads! Thanks, Amber, Mike, Jeff & Brian. Good show. Keep up the good work. 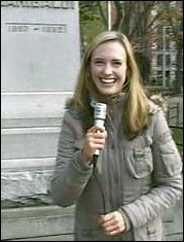 No time to write this up this AM, but my “video-video” juices are flowing… (FYI, I produced two videos about the desktop video revolution in the ’90’s). The announcement today of AOL and Barry Diller’s deals with a start up called Brightcove of Cambridge, MA, lead me to their site and their excellent Flash presentation on why online distribution of video is the next wave. It’s EXCELLENT and highly recommended. From what I can tell, these guys very much have it together. Check it out at Brightcove.com.

When I was writing for Videography, among other events, I used to go to every Steve Jobs MacWorld keynote in San Francisco, and LOVED the show. (If you haven’t seen Jobs in action, even if you’re not an Apple fan, it’s worth the experience to see perhaps the most masterful presenter, well, er, salesman in corporate America.) But, since I’ve been trying to tune in via QuickTime from my home office, I’ve been grossly disappointed in the quality of streaming QuickTime.

Finally, with the latest Jobs webcast using MPEG4, QuickTime is delivering a very watchable experience of Jobs’ “special event” announcement of the new iTunes, the new iPod Nano and the new Motorola iTunes phone. Click here to check it out. (QuickTime 7 recommended… Yes, you can get that for Windows too.) 😉

Calling the revamping of its CBSNews.com web site an “extreme makeover,” the relatively new president of the relatively new division, CBS Digital Media, Larry Kramer (a true Net Vet as well as founder and former CEO of CBSMarketwatch.com) announced a “seismic change” (new Web attitude) at the old network’s news organization. He said in an online video that new initiatives or “investments” would include podcasts, a blog called “Public Eye” (which will provide feedback and criticism as well as public praise for CBS newscasts), and lots of custom “web-only” video content on an on-going basis.

This new commitment to new content in some ways reflects what other networks are doing with their cable news sister networks. As reported by the New York Times, Kramer calls this a “cable news bypass.” He said in the online video announcement, “On the web, daytime is prime time,” and pointed to larger audience opportunities online than even cable can provide.

We’ll see if they can get traction (build a powerful/viable audience), but Kramer “gets the Web” and should be able to provide the necessary leadership. Certainly, this CBS initiative couldn’t hurt; and it will most probably inspire other news organizations to get more serious (and hopefully more transparent) about the importance of their organization’s web presence. Let’s hope so.